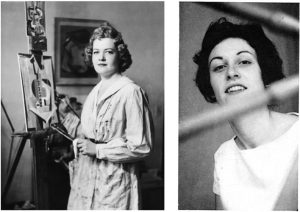 Groundings—dialogues between contemporary and historic members of American Abstract Artists

Groundings examines the continuing legacy of American Abstract Artists by juxtaposing the works of historic and contemporary members of the organization. Having little abstract tradition of their own, American artists, many of them immigrants to this country, formed this group in New York in 1936 at a time when abstract art was met with strong, even critical resistance. Through this group, one of the earliest to be particularly inclusive of women artists, a new advocacy emerged providing opportunities to exhibit and a much-needed refuge for discussion related to new ideas and artistic theories.

Originators of this group channeled a Cubist-based tradition of cool structural abstraction in the face of prevailing Social Realism and later held strong to this aesthetic during the dawn of the emotive and brutish school of Abstract Expressionism. Today, the group continues to expand in numbers and varying aesthetics.

This online exhibition, the first of its kind for the organization, brings together the work of ten women artists, five of whom are historic members and five of whom are contemporary members. Through the pairing of these artists, it is my intention to find aesthetic commonalities and compositional similarities that bridge decades of thinking and making. Throughout history, whether it be ancient, modern, or contemporary, art circulates a rhythm of evolution—one generation building upon the groundings of the former. 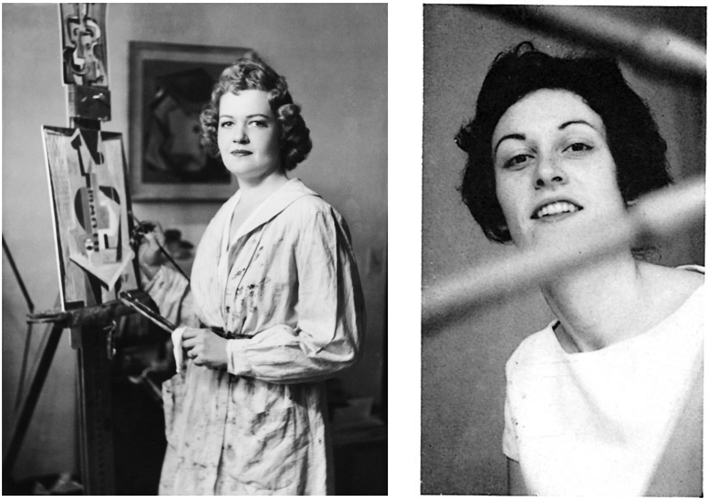 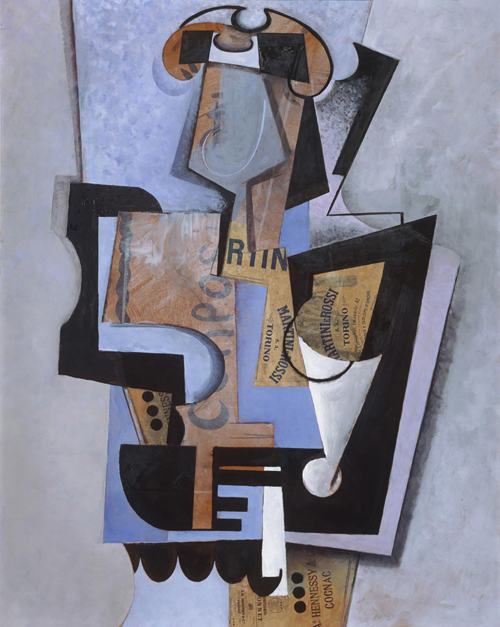 Suzy Frelinghuysen was a formidable force in early American Modernism. Linked to history as a Park Avenue Cubist, a group that included Albert Eugene Gallatin, George L. K. Morris, and Charles B. Shaw, her paintings flatten a subject, then expand on the principles of relative perspective. All logic of representational appearances of her subject is put aside; shapes deduced from this natural form remain. 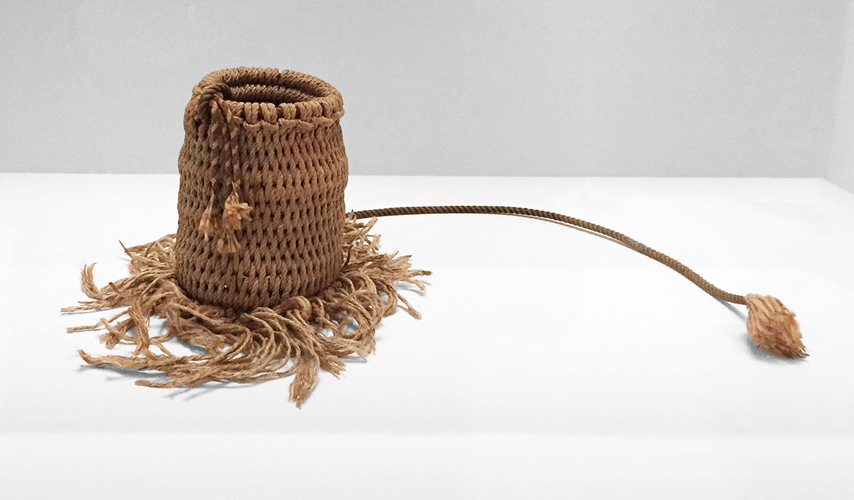 Sculpturally based, Alice Adams has always been characterized by her interest in structure expressed through materials. Her object-based work takes on the form of the familiar but not the function. Just as Frelinghuysen used the ideas behind Cubism to explore perception and perspective, Adams has since the 1960s, developed a unique approach to sculpture. “Whether yarn, rope or steel cable in the early work or the building materials like wood and plaster in later abstract configurations, I want their ambiguity and familiarity to inform the perception of the work.” 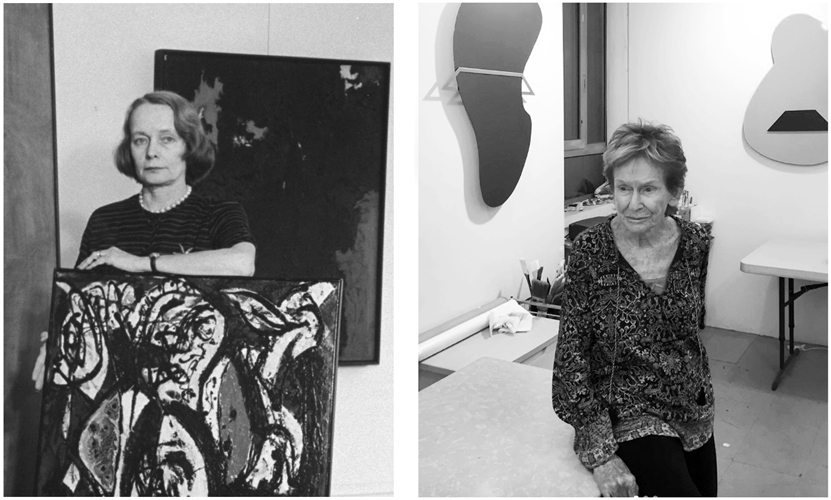 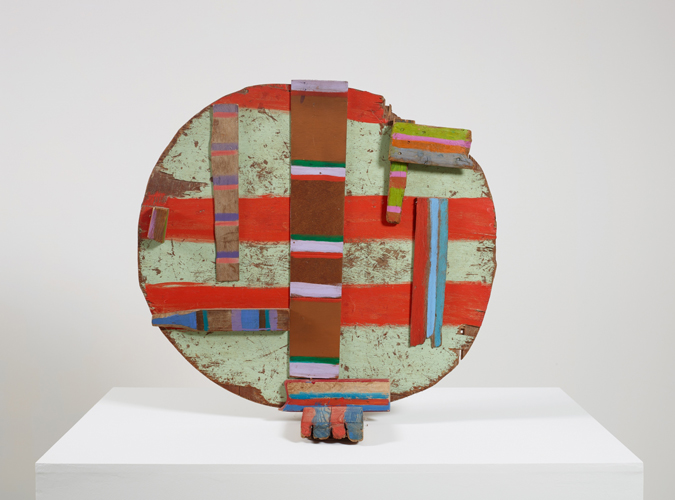 Betty Parsons may have been best known as a visionary gallerist who launched the careers of Rothko, Reinhardt, and Newman, but her true genius continues to be discovered in her own artistic pursuits. While her canvases took on the painterly approaches of post-war art, her sculptural assemblages are entirely her own. Often clunky and rough, these works take on an animated and spontaneous personality when Parsons applies color and pattern. It is contour that carries the character and narrative core in both Parsons’ paintings and sculptures. 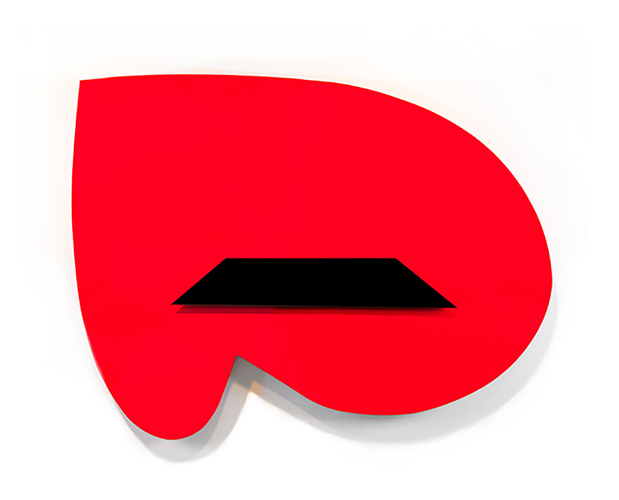 Katinka Mann, like Parsons, relies on contour in her curved geometric works. Overtly manufactured, she cuts organic forms out of aluminum and attaches a contrasting often hard-edged shape to the cutout. “My work is influenced by Taoism. In Taoism, opposites are oneness. These paradoxes help change our perceptions of how we see space and form. My intent is to use visual elements, drawing me and others toward a new perceptual sensibility.” Embracing the flatness and clean aesthetics of minimalism, Mann uses color and texture to defy flatness. 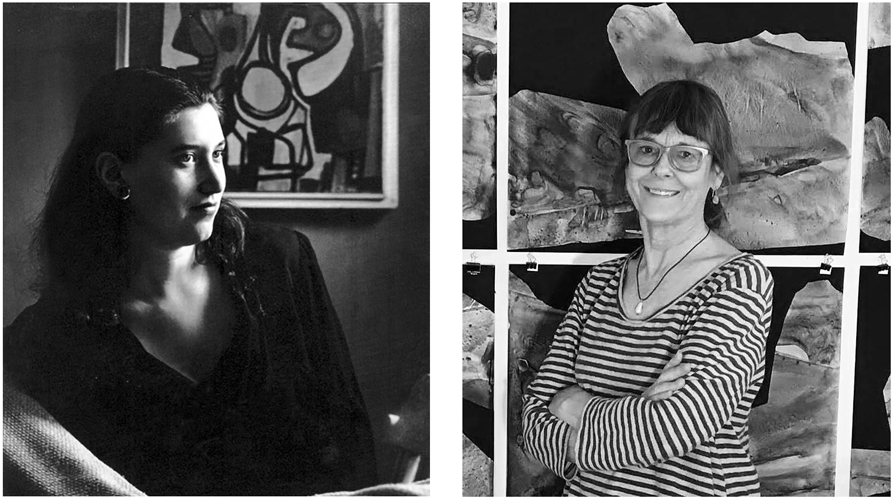 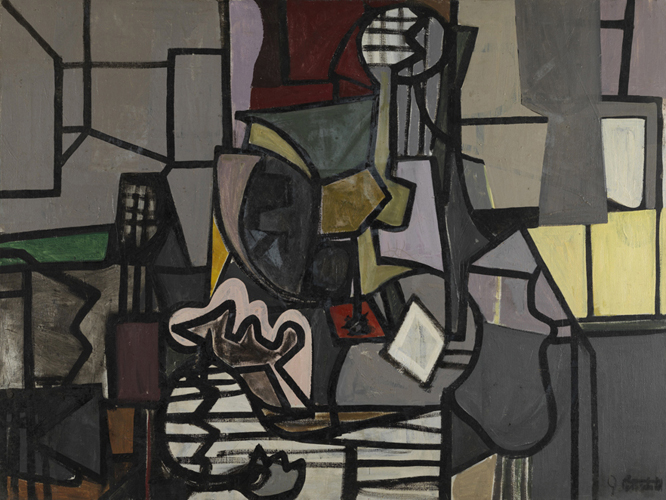 Judith Rothschild was a remarkable colorist with a keen eye for composition. An active member of American Abstract Artists, she served as its President from 1978 to 1979. Rothschild built her compositions using a linear language—looping lines that connect into shapes—while often applying planes of color that drop one’s eye deep into a flexible space. 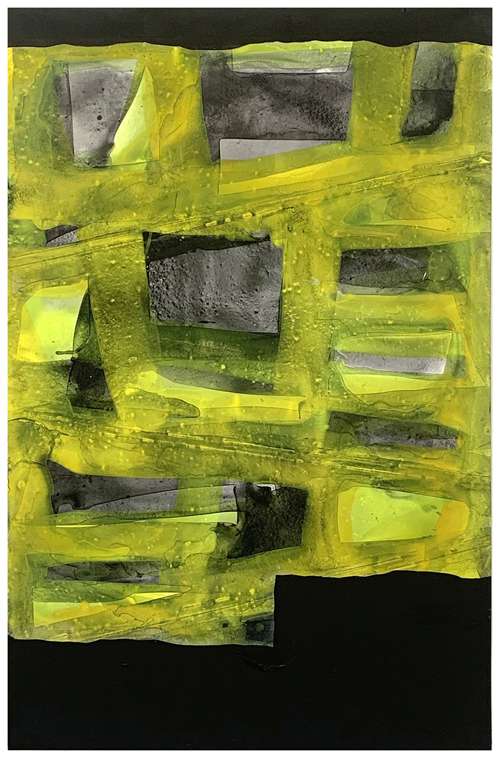 Similarly, Nancy Manter juggles space. Influenced by natural phenomena such as our radically changing atmosphere, ocean tides, and plate tectonics, Manter structures her works on panel with planes of color and texture. She uses geological terms like “dip-slip faults” and “chatter marks” to describe her work. While employing an abstract language, her work is not without emotion. “My work continues to reflect my deep sense of foreboding, anticipation and curiosity in nature, as it exists today.” 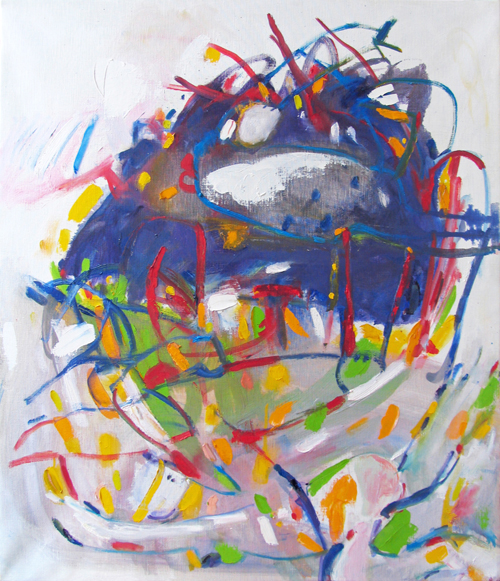 Edith Schloss was known for her narrative abstractions that originate from a still life set against a window-on-the-sea or inspired by an ancient Greek myth. With a biography inextricably linked to the Loft Generation in downtown New York that included painter Willem de Kooning, photographer Rudy Burckhardt, and writer Edwin Denby, Schloss developed a style that balanced crudeness with complexity. 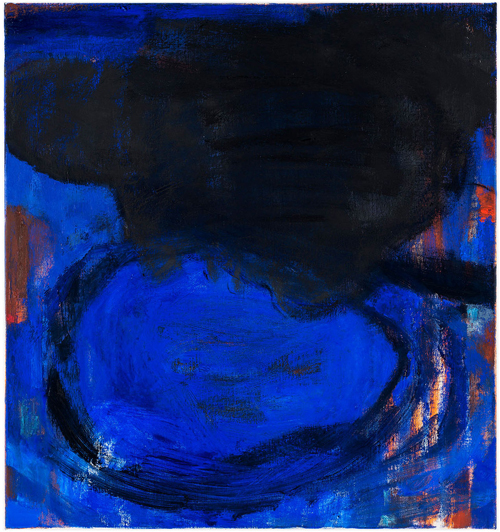 Like Schloss, Iona Kleinhaut relies on the emotive power of highly saturated and densely layered colors to introduce a narrative that often features blindfolded or disembodied heads, stunted tree limbs, or rib cage enclosures, all of which are enmeshed in an ambiguous landscape. Through the murky palette, Kleinhaut evokes the ongoing toxic legacy of fear and loss. 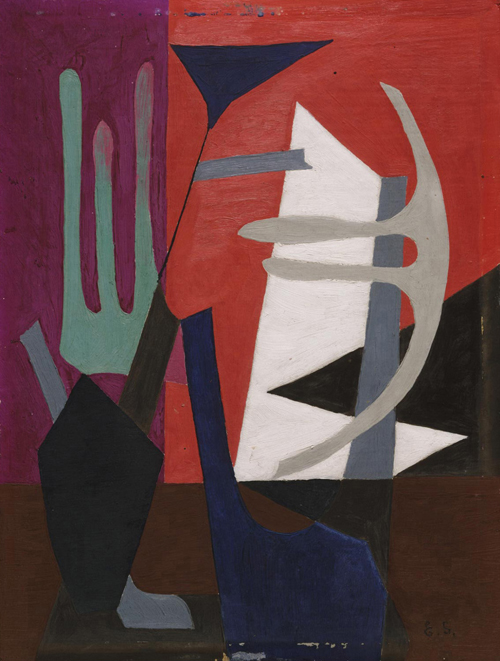 Esphyr Slobodkina was a founder of American Abstract Artists and served as president from 1963 to 1966. As a noted Russian avant-garde artist, her bold color and tightly controlled brushwork brought a unique and determined influence to early American modernism. Often theatrical in her composition, shapes seem to dance in and out of her paintings in rhythmic discourse. 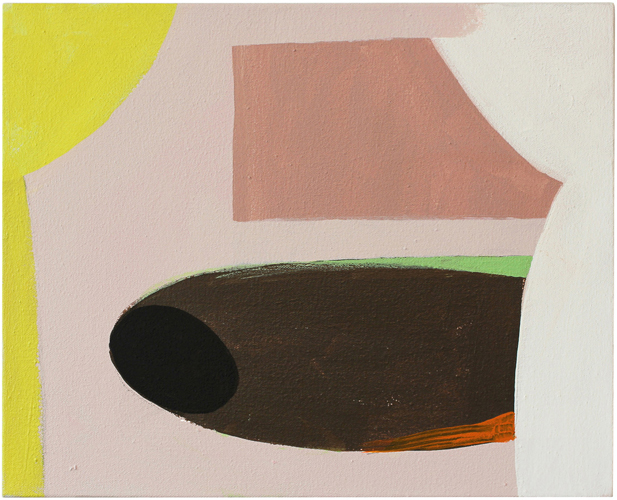 Intrigued by the mind’s ability to recognize, conceptualize and manifest spatial constructs simply through the use of shape, edge and color, Karen Schifano takes constructive cues from Slobodkina, designing a performative stage in her paintings. These framed openings present a proscenium setting from which she projects shapes, symbols, and metaphors.

As these artistic pairings convey, American Abstract Artists has come to represent a multiplicity of stylistic possibilities revolving around diverse and personal ideologies. In one of his early advocacies of abstraction, George L. K. Morris argued for originality. In an article published in Paris Review, 1938, Morris implored his generation as they “desire to become grounded in the new tradition” not to “hide your voice so stiffly behind” the styles of others. Emulation has its inherent pitfalls.

There are threads of connection between the works of these ten women and the history that came before them, yet their voices are distinct. Frelinghuysen, Parson, Rothschild, Schloss, and Slobdkina made lasting strides in their pursuit of abstraction. Likewise, Adams, Mann, Manter, Kleinhaut, and Schifano are forging ahead with ideas that will endure.

Jason Andrew is an independent curator and writer based in Brooklyn.

Suzy Frelinghuysen (1911–1988)
Suzy Frelinghuysen was born in New Jersey in 1911 and displayed an early interest in painting. While she never earned a formal degree she was privately tutored in art and music and made childhood trips to Europe. In 1938 became the first woman artist to have a painting placed in the permanent collection of the Museum of Living Art.
https://www.frelinghuysen.org/bios/suzy.html

Alice Adams (b. 1930)
Alice Adams was born in Brooklyn, New York in 1930. She earned her BFA from Columbia University in 1953. After graduation, she studied for a year at the L’Ecole Nationale d’Art Decoratif in Aubusson, France. She is a recipient of the Guggenheim Foundation Grant and a two-time recipient of the National Endowment for the Arts Fellowship.
https://www.aliceadamssculpture.com/

Betty Parsons (1900–1982)
Betty Parsons was born in New York City. She studied sculpture in Paris at the Académie de la Grande Chaumière, and in the summers, she studied painting with Arthur Lindsey on the coast of Brittany. She is best known as the gallerist behind the Betty Parsons Gallery, which she opened in 1946 and ran until her death in 1982.
https://www.bettyparsons.org/

Katinka Mann (b. 1925)
Katinka Mann was born in New York City in 1925. She attended the Hartford Art School at the University of Hartford, Connecticut. Mann has been recognized by numerous grants, residencies, and awards, such as the studio program at The Elizabeth Foundation for the Arts, where she has maintained a studio from 2009–2019.
http://www.katinkamann.com/

Judith Rothschild (1921–1993)
Judith Rothschild was born in New York City in 1921. A graduate of Wellesley College, Rothschild studied painting at the Cranbrook Academy of Art, at the Art Students League with Reginald Marsh, at Stanley William Hayter’s Atelier 17, and with Hans Hofmann and Karl Knaths. She was a member of the Jane Street Gallery, and an editor of Leonardo magazine.
http://judithrothschildfoundation.org/

Edith Schloss (1919–2011)
Edith Schloss was born in Germany in 1919. In 1936 she attended Scuola Privata at Teresita Baldi in Florence and studied Italian and Renaissance Art. In 1937 she traveled to England where she studied drawing at night at Shrewsbury Technical College. During the Blitz on London by German forces, she left England for America. In the US she studied at the Boston School of Practical Arts and applied for American citizenship. In 1942 she enrolled in the Arts Student League. In 1943 she studied art history, music and poetry at the The New School of Social Research, New York.
http://www.edithschloss.com/

Iona Kleinhaut (b. 1955)
Iona Kleinhaut was born in 1955 in New York City, where she continues to live and work. She holds a BFA from Tyler School of Art at Temple University and an MFA from Columbia University. She is the current President of BAU Institute’s summer arts residency at the Camargo Foundation in Cassis, France.
http://www.ionakleinhaut.com/

Esphyr Slobodkina (1908–2002)
Esphyr Slobodkina was born in Chelyabinsk, Russia in 1908. During the Russian Revolution of 1917, she emigrated with her family to Harbin, Manchuria (China), where she studied art and architecture. Slobodkina immigrated to the United States in 1928 where she enrolled at the National Academy of Design.
https://www.slobodkinafoundation.org

Karen Schifano (b. 1955)
Karen Schifano was born in 1955 in Huntington, New York, and lives and works in New York City. She received a BA in Art History from Swarthmore College, an MFA from Hunter College, and fellowships from the MacDowell Colony and the Fine Arts Work Center in Provincetown, Mass.
https://www.karenschifano.com/

Posted in Article Tagged with: groundings