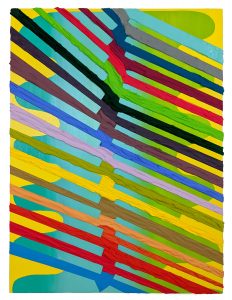 My introduction to stripes as a certifiable subject for art came in 1971 when I was a student at Moore College of Art and visited England for the first time. It was there that I saw Bridget Riley’s hypnotic stripe paintings in her first museum survey at the Hayward Gallery. A year later, I witnessed firsthand Gene Davis’s spectacular Franklin’s Footpath as it was being painted on the Benjamin Franklin Parkway. At the time, the 414-foot-long painting of candy-colored stripes in front of the Philadelphia Museum of Art was the largest artwork in the world. 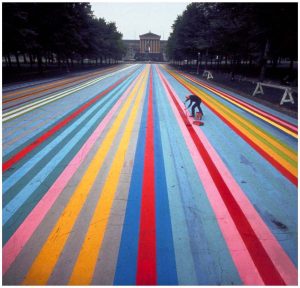 Stripes are first and foremost templates for artists’ personal attractions and philosophies, even when that stance might be “what you see is what you see,” as Frank Stella famously quipped of his early paintings. What’s often forgotten about Frank Stella’s terse remark—made during a Q&A published in ARTnews in 1966—is that he prefaced it by saying, “All I want anyone to get out of my paintings is the fact that you can see the whole idea without any conclusion…” It’s not even clear that Stella wanted his paintings to be considered purely for their formal properties. How can his evocative titles, among them Valparaiso Flesh and Green, Palisades, Honduras Lottery Co., and Palmito Ranch not stir romantic thoughts? Stella later admitted to “emotional ambiguities” in his works.

Barnett Newman saw his “zips” as a way to create symmetry and considered them integral to his paintings. In the catalogue of MoMA’s 1971 Newman retrospective, Thomas B. Hess repeated a story told to him by Newman’s friend, the sculptor Tony Smith. Smith recalled Newman swiftly correcting a museum curator who told him he’d realized Newman’s iconic painting, Vir Heroicus Sublimis, was simply a relationship of shapes. Newman sternly informed him that “the only things in the picture that count are the stripes.” Hess also cited Newman’s study of the teachings of the Kabbalah as a major influence on his stripe paintings and sculptures.

Agnes Martin stated that her pale, delicately drawn and painted stripes were inspired by music and that music was the art form that most closely resembled the ideal of unconditional abstraction. “I think the highest form of art is music,” wrote Martin, a fan of the classical composers Handel and Beethoven.

Early members of American Abstract Artists were among the 20th century artists who utilized stripes as compositional tools, as demonstrated in these works by founding AAA members Alice Trumbull Mason and Burgoyne Diller. 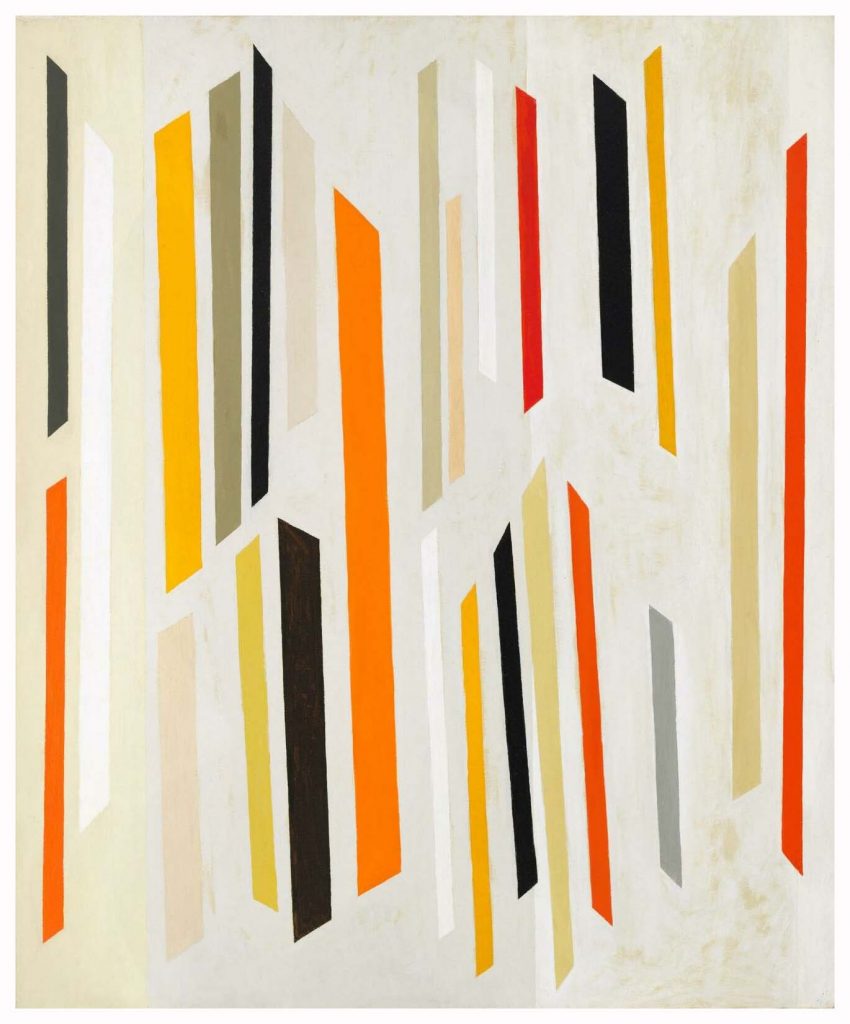 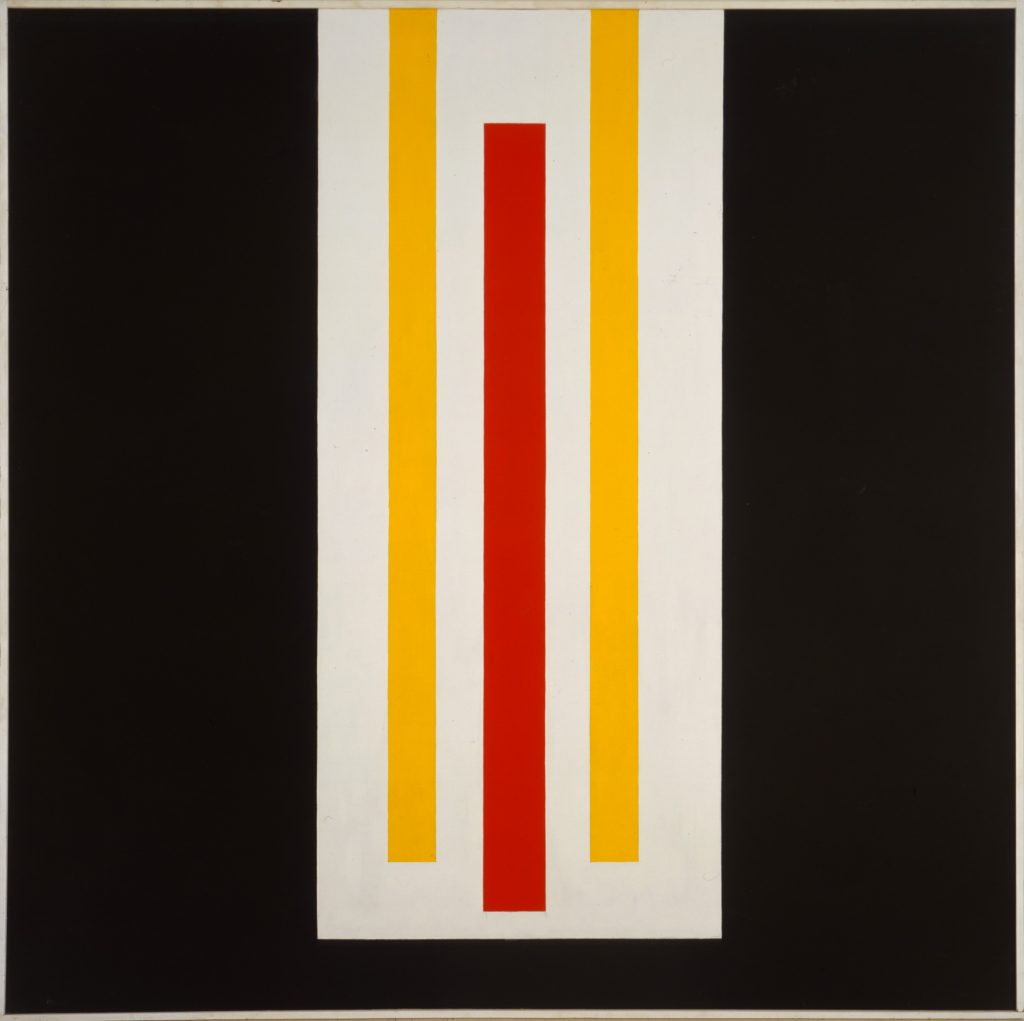 The prospects for stripes in art were starting to seem endlessly exciting in the 20th century. In the 21st century, they still are, as evidenced by recent works from members of American Abstract Artists.

Of her vibrantly colored stripe paintings, Melissa Staiger says, “Relationships, patterns, and shifts of movement shape my work. I stack thick layers of paint to produce marks that resemble a flexible spine and rib cage… These fresco-like layers hold sensitivity and harmony. The lines that stretch across the surface represent the integration of both hemispheres of the human body in a spectral wave.” 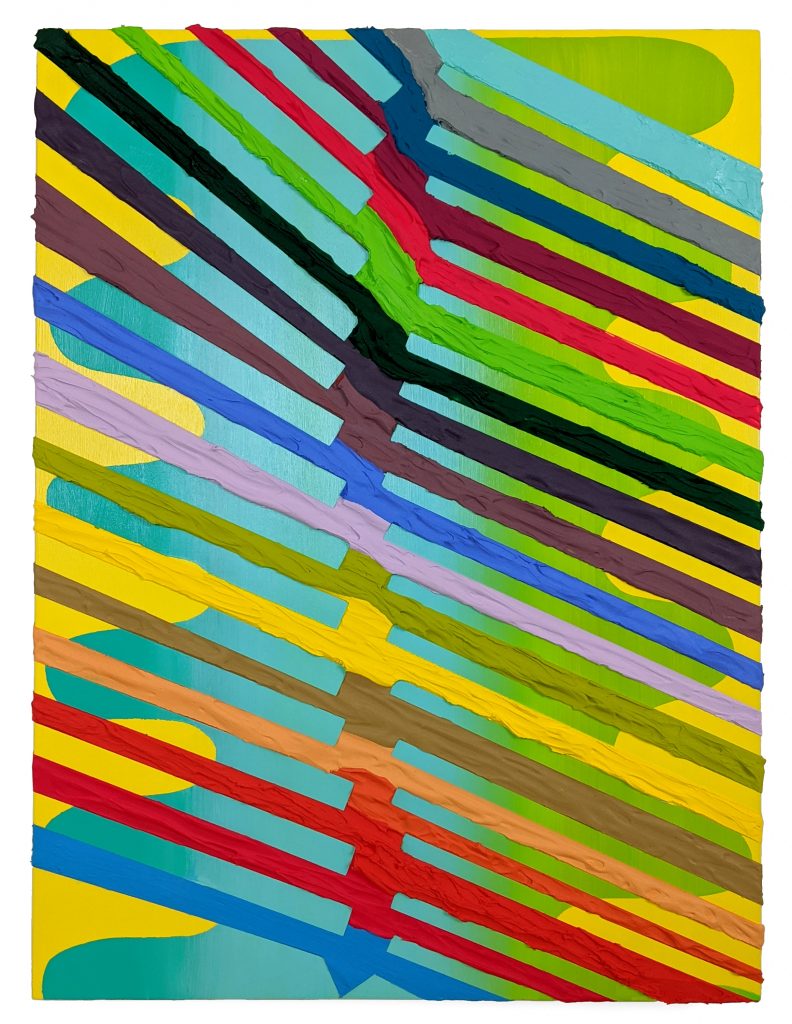 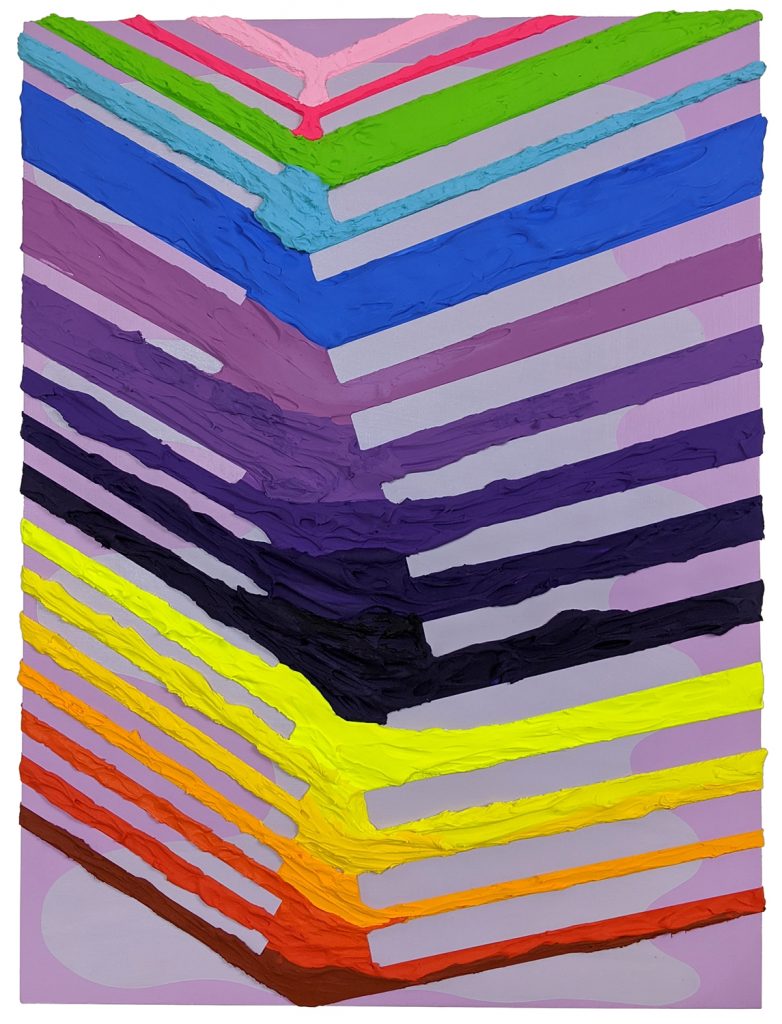 James Juszczyk explores the interaction of colors in precisely arranged geometric compositions. One of his recent paintings, Puzzle, from 2020, has a simpler composition than his previous works and is reminiscent of Josef Albers’ Homage to the Square paintings. 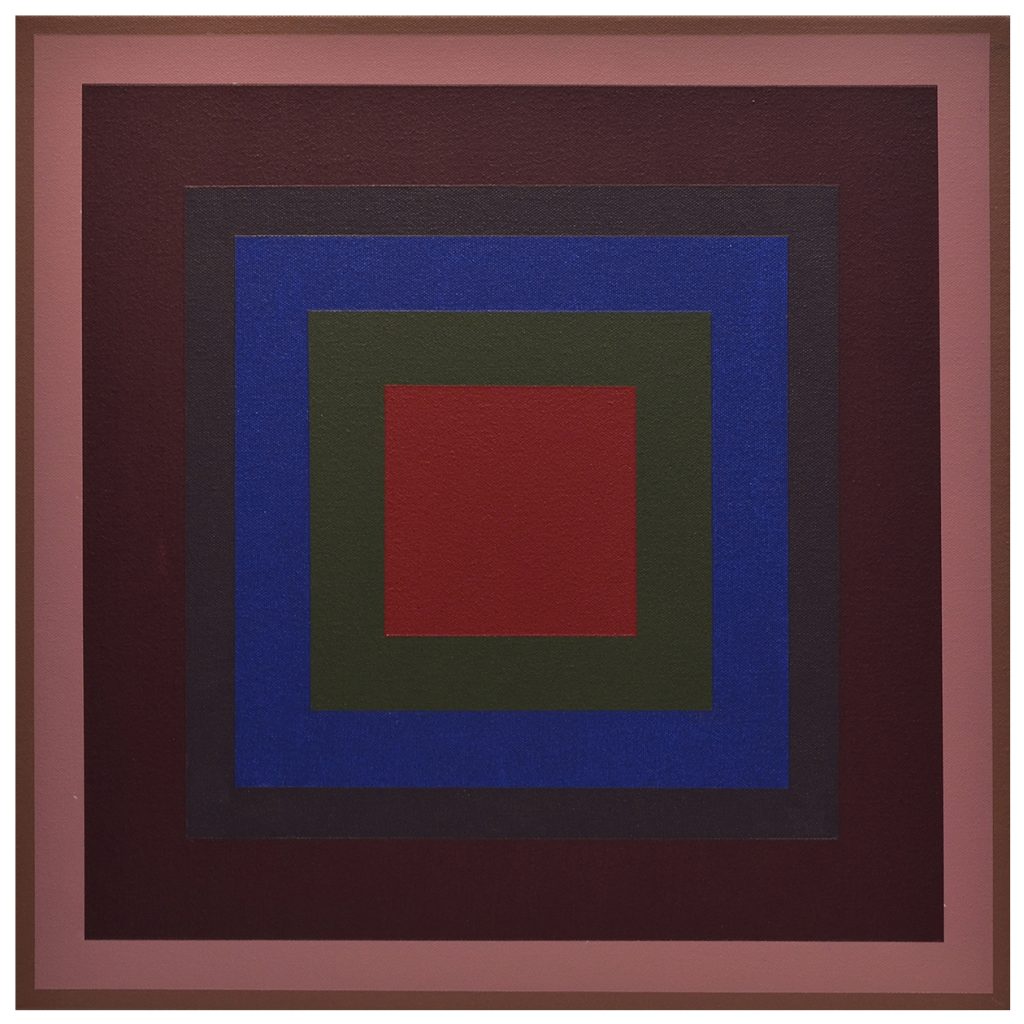 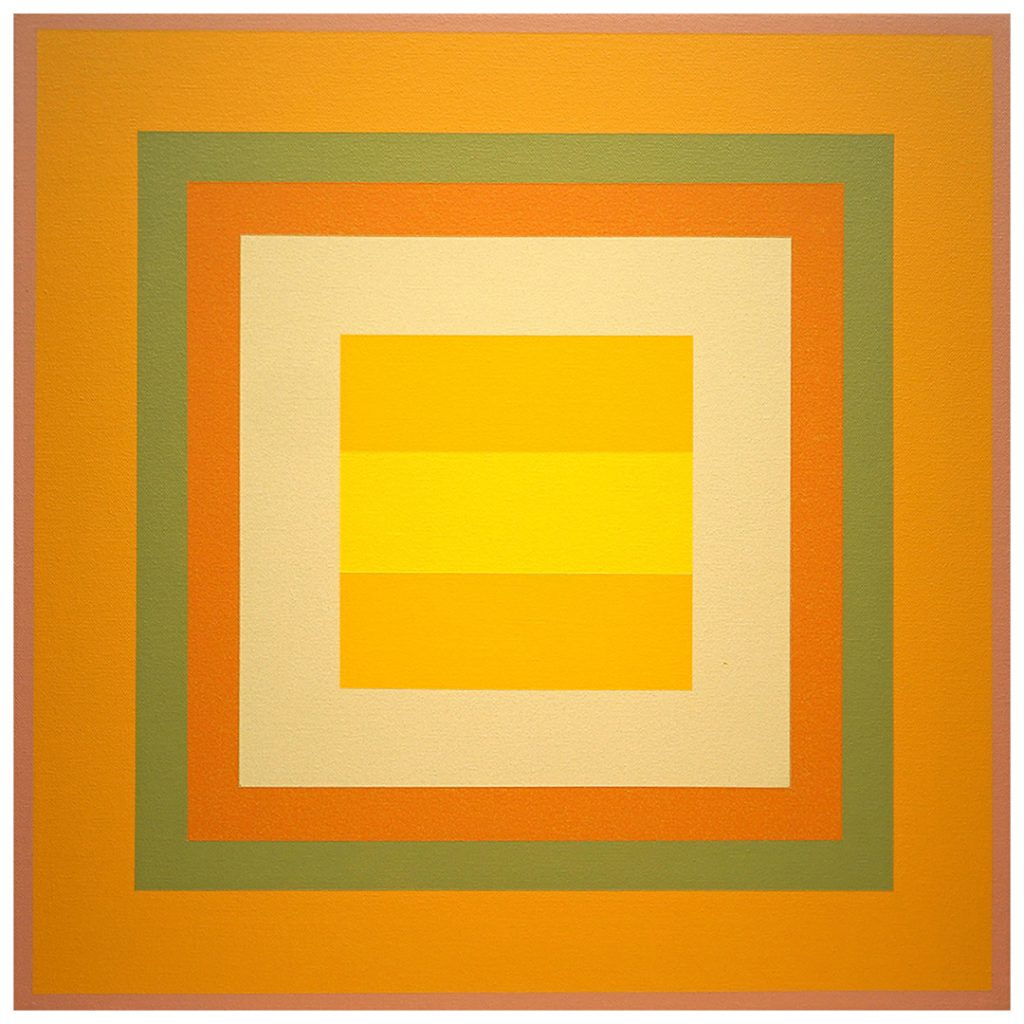 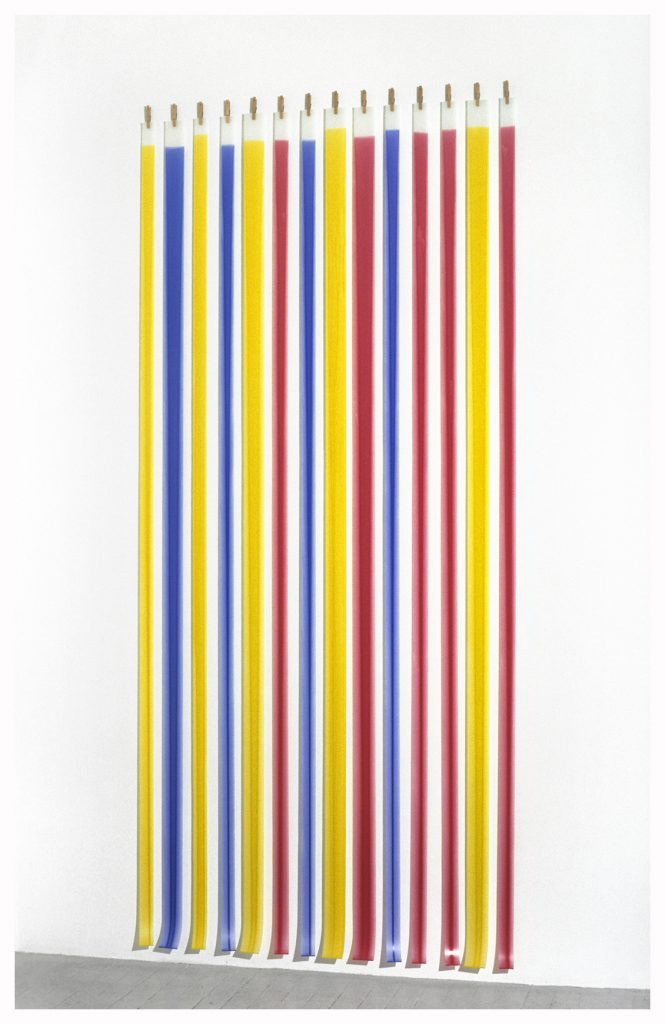 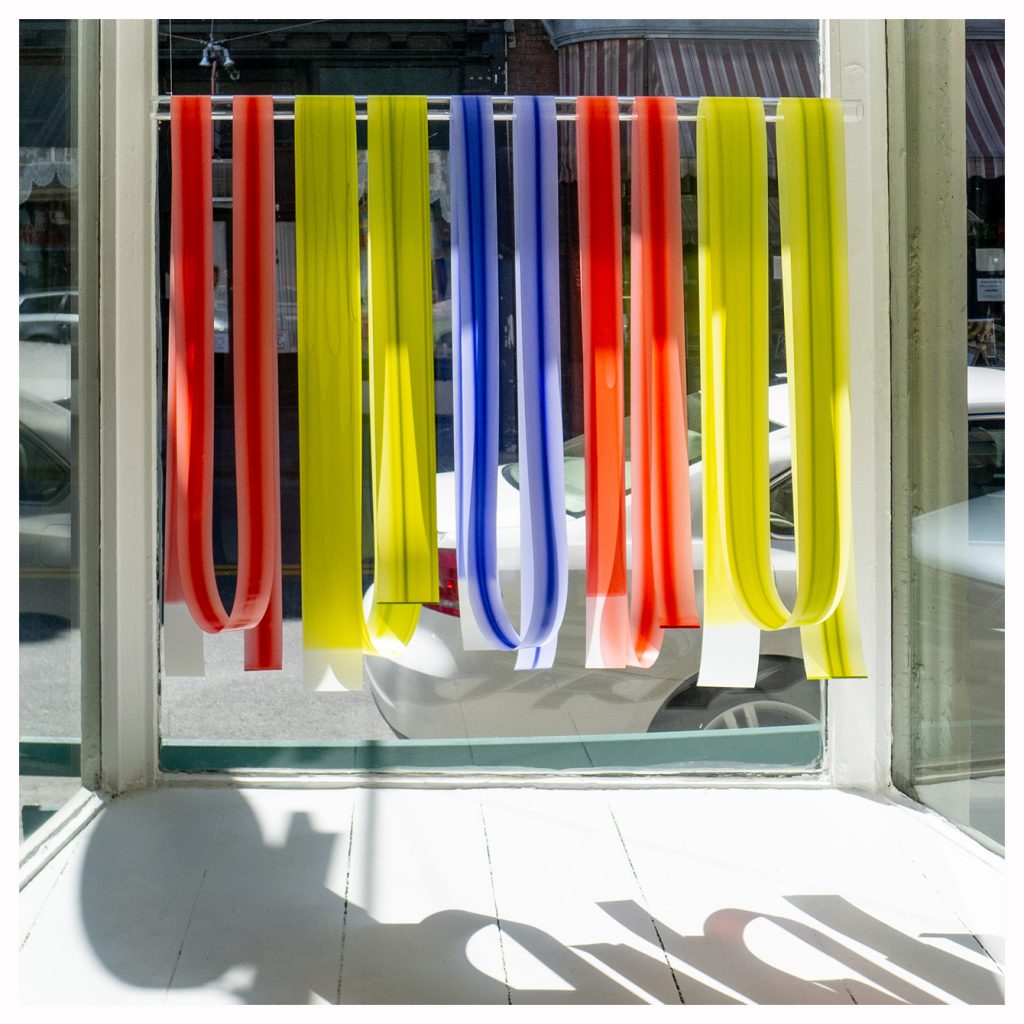 Joanne Mattera, from a family of weavers and tailors, began her Silk Road series of paintings 15 years ago. She compares her painting process to weaving: “In the earliest paintings I alternated layers of vertical and horizontal swipes of translucent color, which, with their intimation of warp and weft, yielded a color field that suggested silk.” 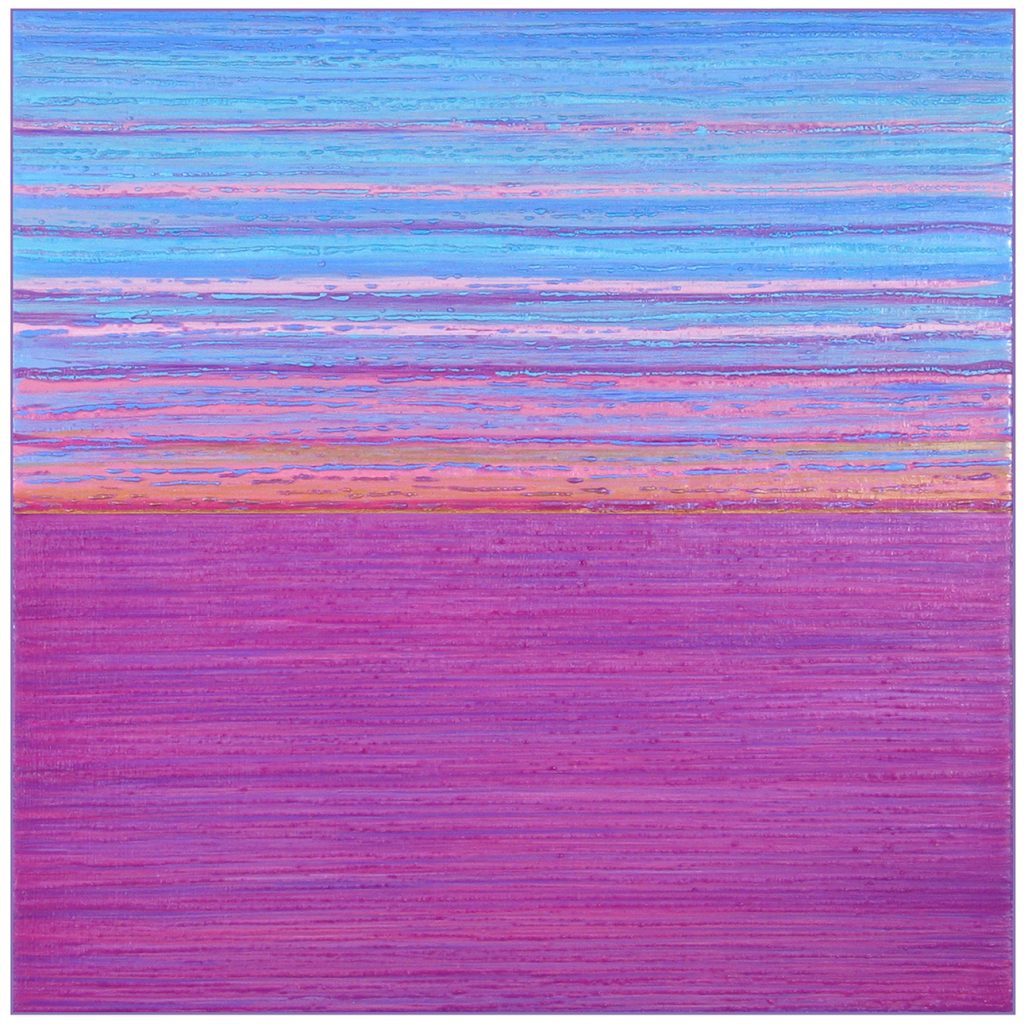 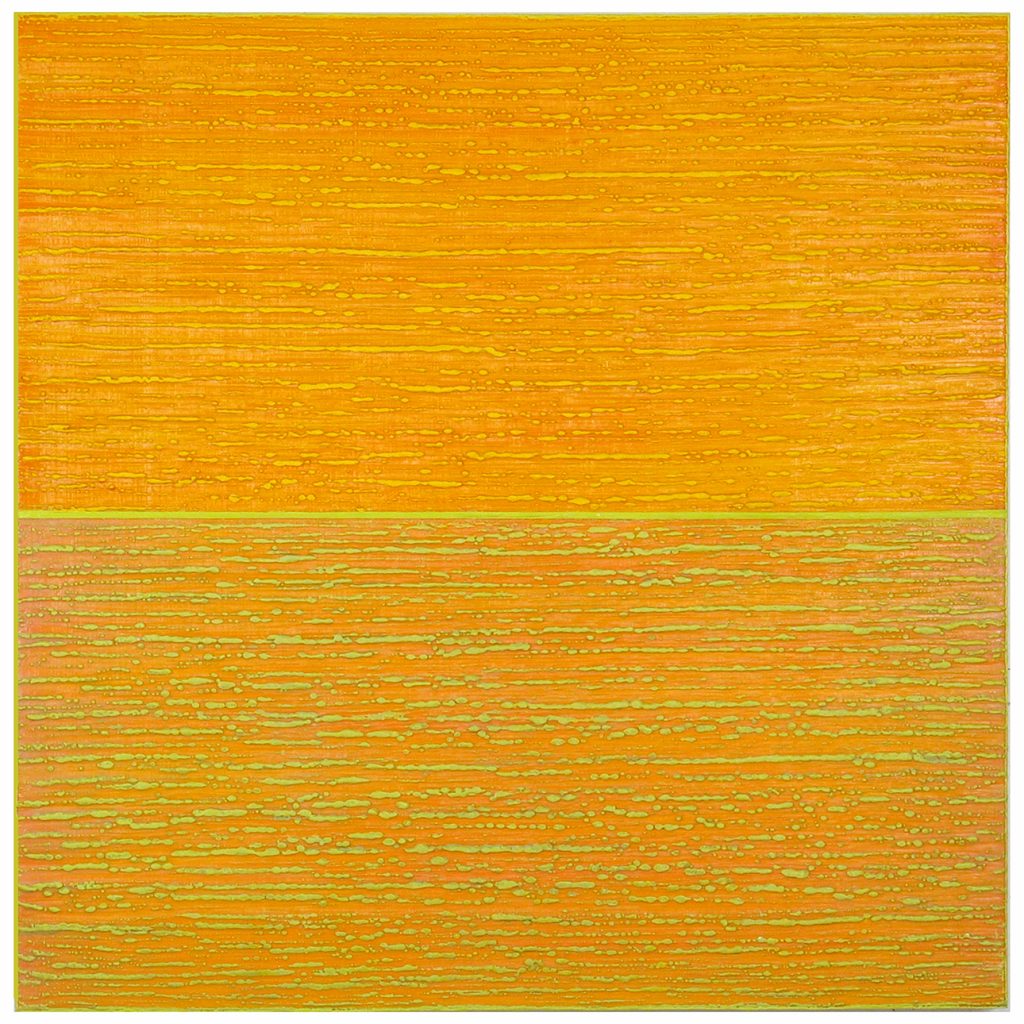 For more than 15 years, Kim Uchiyama has used the compositional structure of horizontal bands in her paintings. She states, “A limited framework has allowed me to more intensely explore an emotional range of color and develop it into language. There are limitless possibilities for color and color relationships. The simplicity of format speaks to the flatness of the picture plane, but color relationships provide complexity and depth.” 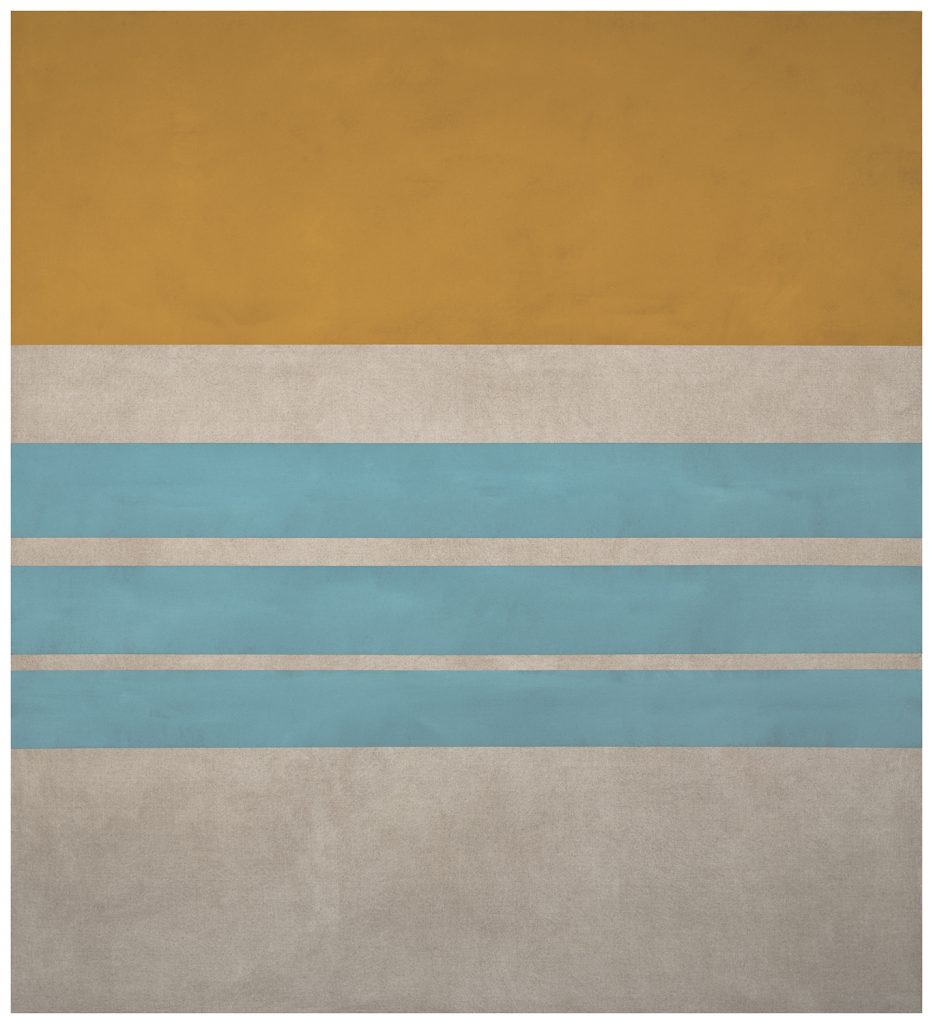 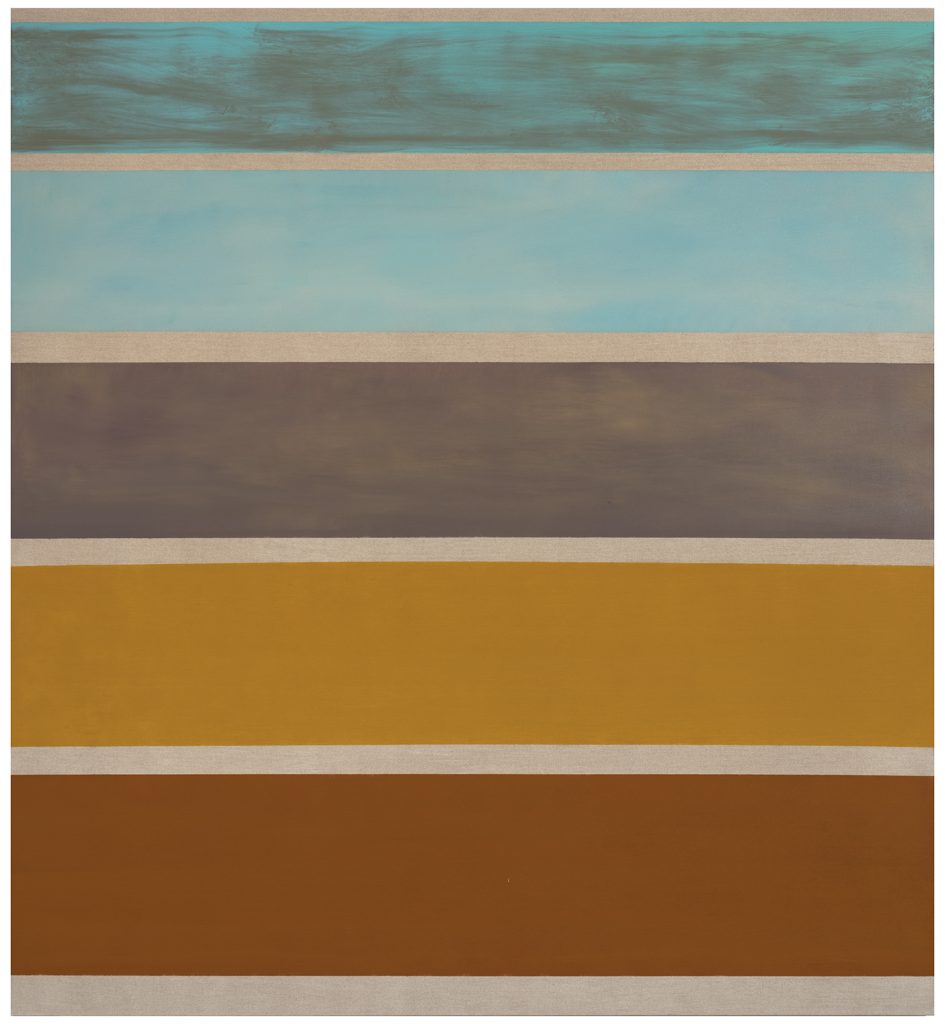 Don Porcaro’s totemic layered stone sculptures explore the nature of human interaction with the physical world through references to ancient and Near Eastern architecture and man-made objects. “The building up and layering of stones which creates the bands of strata, directly alludes to the accumulation of geological time as well as cultural history,” Porcaro says. “A trip to Turkey a few years ago was particularly inspiring for the geometric tile and stone work of the mosques.” 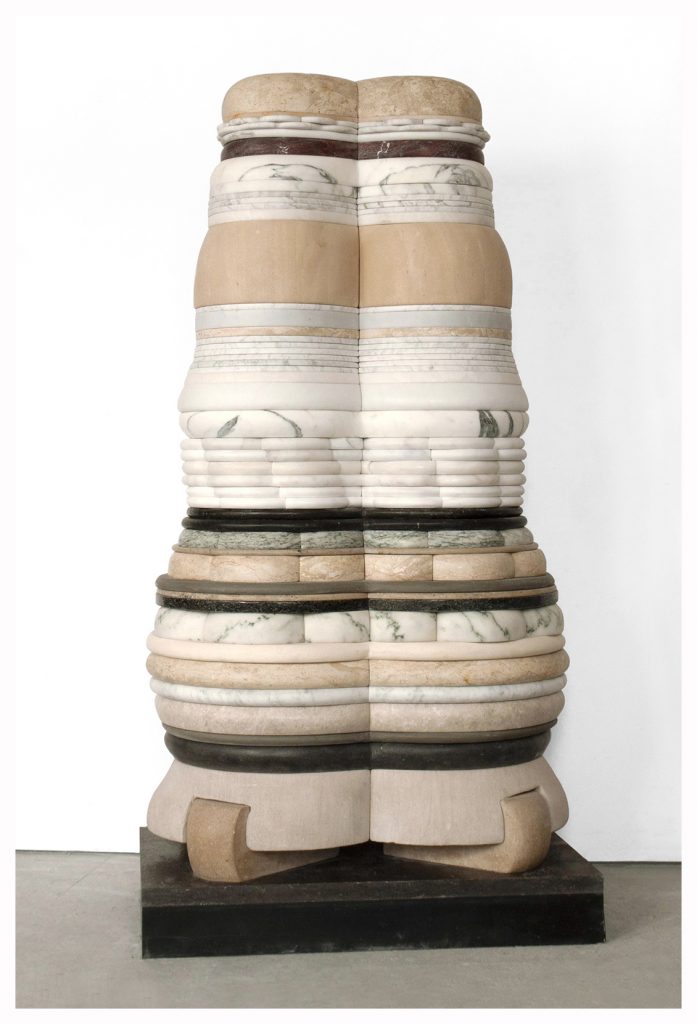 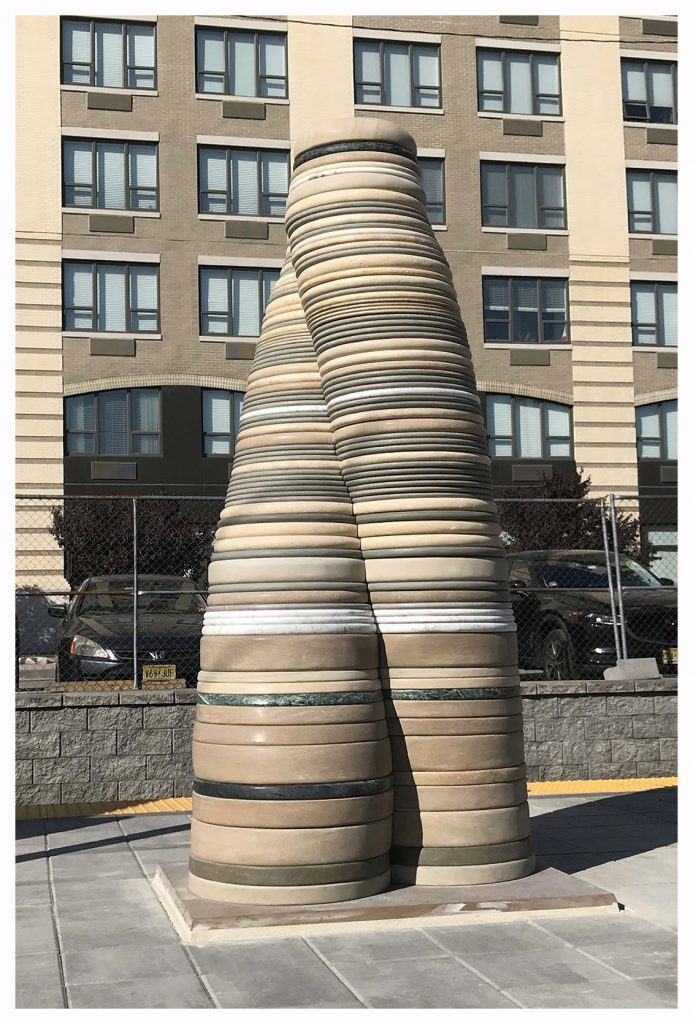 Gabriele Evertz’s recent paintings, completed during the pandemic, reflect a shift in practice and palette for her. Evertz says, “The focus is now on the materiality of paint and expansion of pigments, to include the oxides and the deeper, more modulated tones of lower intensity. What has not changed is my intention: I plan my work with the viewer in mind who brings purpose and final meaning to the paintings.” 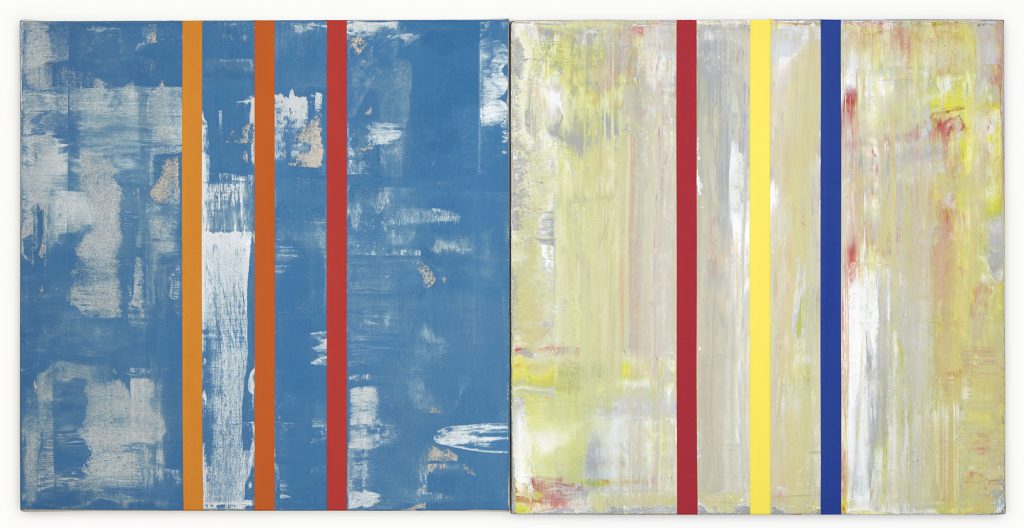 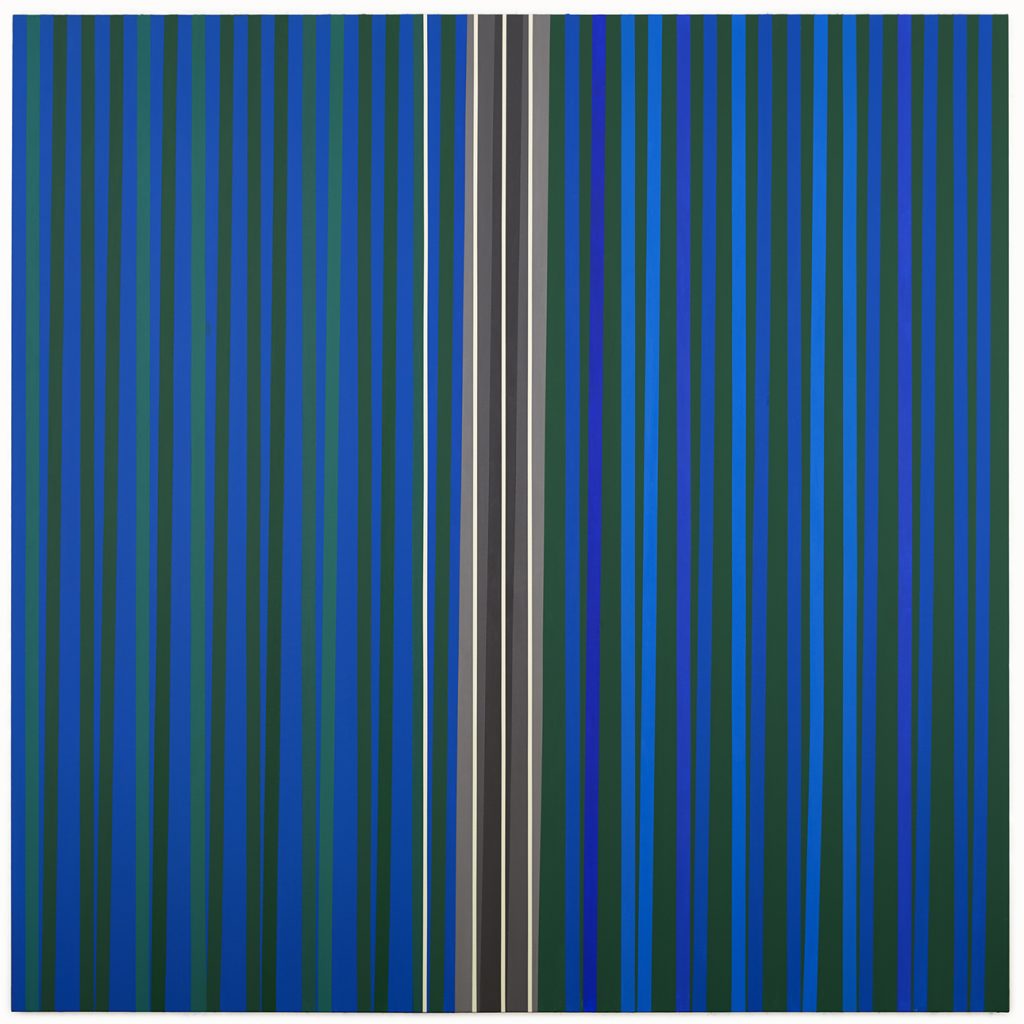 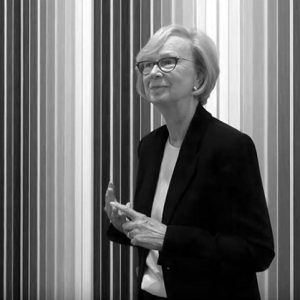 Gabriele Evertz was born in 1945 in Berlin, Germany. Evertz emigrated to the U.S. at the age of 19 and holds an M.F.A. in painting and B.A. in art history, both from Hunter College. She lives and works in Brooklyn, N.Y. and has exhibited internationally. In addition to her painting practice, Evertz was Professor of Art, Painting in Hunter College’s Department of Art & Art History, N.Y.C. from 1990–2018. She is a key figure in the renowned Hunter Color School. Evertz has also curated several critically-acclaimed artist retrospectives and exhibitions, including a survey of fellow AAA member Robert Swain, Visual Sensations: Robert Swain Paintings, 1967–2010.
http://www.gabrieleevertz.com/ 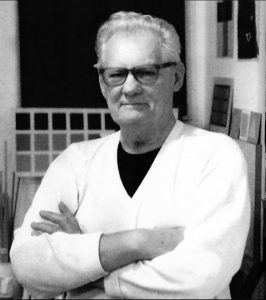 James Juszczyk was born in Chicago, Illinois in 1943. He has maintained a deep interest in and commitment to the principles of non-objective, geometric painting. His mentors, Julian Stanczak and Piero Dorazio, both Masters of the use of color, have had a profound influence on his dedication to continue to make color his prime focus. Juszczyk’s paintings have been extensively exhibited in both the United States and Europe.
http://www.jamesjuszczyk.com/ 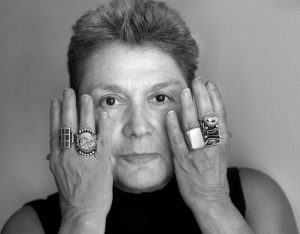 Joanne Mattera was born near Boston in 1948. She received a B.F.A. from Massachusetts College of Art and an M.A. from Goddard College. Her 39th career solo took place recently at Addington Gallery, Chicago. Her memoir: Vita: Growing Up Italian, Coming Out, and Making a Life in Art, was published in 2019 by Well-Fed Artist Press. Joanne divides her time between Salem, Mass. and the Upper West Side of New York City.
http://www.joannemattera.com/ 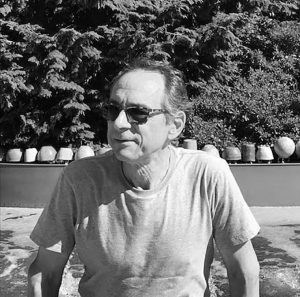 Don Porcaro was born in Newark, N.J. in 1950. A graduate of Columbia University’s M.F.A. program, he has exhibited nationally and internationally and has received grants from the Pollock-Krasner Foundation, New York Foundation for the Arts and New York State Council on the Arts, among others. In 2017 he was awarded a N.J. Transit Authority public art commission for the Jersey Avenue Light Rail station in Jersey City, N.J.
http://www.donporcarostudio.com/ 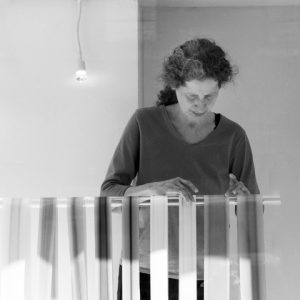 Mary Schiliro was born in Brooklyn, New York in 1959 and currently lives and works in New York City. She received a Master of Fine Arts degree from Hunter College of the City University of New York. Her work has been exhibited widely across the United States as well as internationally in France, Belgium, the Netherlands, and Germany.
http://maryschiliro.com/ 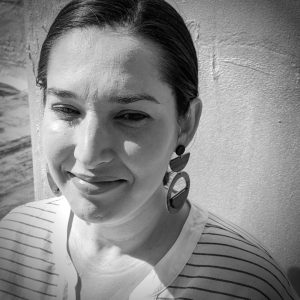 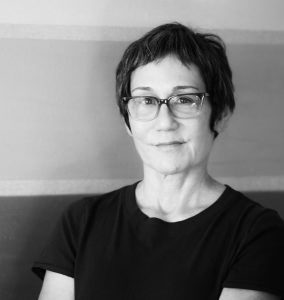 Kim Uchiyama was born in Iowa in 1955 and lives and works in New York City. She studied at Drake University (Des Moines and Florence, Italy), Yale Summer School of Art and Music, the New York Studio School of Drawing, Painting, & Sculpture and has received fellowships from the New York Foundation for the Arts and the MacDowell Colony. Her work has been reviewed in The New York Times, ARTnews, The Brooklyn Rail, The New Criterion and The International Edition of the Journal of Art.
http://kimuchiyama.com/ 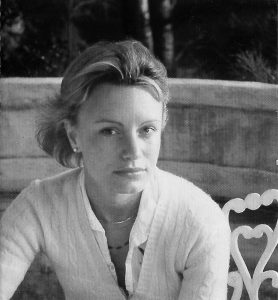 Edith Newhall was born in Philadelphia in 1951. She graduated from Moore College of Art & Design with a B.A. in Art History and from the School of the Art Institute of Chicago with an M.F.A. in Painting & Drawing. She was an editor and later a staff writer at New York Magazine from 1981 to 2003 and has been an art critic for the Philadelphia Inquirer since 2005. She is a co-author of In Artists Homes (1992), Rafael Ferrer: Works on Paper, A Survey 1952–2012 (2012), and William Earle Williams: Party Pictures (2020).

Posted in Article Tagged with: stripes